Last month, we carried out a sad task: with heavy hearts, we took Michel Roux Sr’s name off the roll call of charity patrons on our website.

Michel’s passing hit the whole industry hard. The way he and his brother Albert laid the foundations on which the British culinary revolution were built has been well documented. But at Hospitality Action, we remember him as much for his big heart, as for his genius as a chef.

A charity’s patrons are chosen for the gravitas they bring; their endorsement means they value its work - and so should you. No wonder, then, that HA has always cherished having Michel and Albert as ambassadors for our work.

I grew up down the road from Bray, in Maidenhead. As kids, my friends and I all knew of a magical place called the Waterside Inn, just around a bend in the Thames - though back then, we didn’t know that its magic was culinary.

When I was a teenager, I remember my parents’ excitement before they went to the Waterside to celebrate their silver wedding anniversary. They had a tasting menu with wine flight, and I can still remember Dad lying on the bathroom tiles the next morning to cool his throbbing head.

I was lucky enough to meet Michel many times as editor of The Caterer. On each occasion, he was charming and generous of spirit. One of the highlights of my career at The Caterer came when I travelled with Michel to Spain, to visit Roux Scholar Daniel Cox, who was midway through a stage at Santi Santamaria’s Can Fabes. The evening before we drove up to the restaurant, we dined on tapas in Barcelona’s Boqueria market. Michel sat our party down at a clutch of tables, then served dishes and glasses of wine to us for the next hour. A priceless memory.

When I became Chief Executive of Hospitality Action, I reached out to all of our patrons to introduce myself in my new role. Michel was characteristically encouraging, and told me we could count on his continued support. “I much admire your charity, and I am proud to be a patron and happy to explore initiatives”, he wrote, around that time.

Michel was of course true to his word. A year later, he hosted a fabulous fundraising evening at Roux at Skindles, where Michel’s dear friend Brian Turner interviewed him about his life in the kitchen. And, a month later, he cooked for us at our inaugural Patrons Dinner at the Mandarin Oriental Hotel.

Michel, thank you for all you did for Hospitality Action, and bon voyage.

As one patronage ends, another begins. The whole team at Hospitality Action is delighted and honoured that Michel’s son, Alain, has agreed to take his father’s place on our roster of patrons. I spoke to Alain last week about his new role.

Tell us a little about yourself. What was your route to becoming Chef Patron of the Waterside Inn?

I started my career as an apprentice in the Pâtisserie Millet in Paris in 1984.  From there, I rose through the kitchen ranks in several Michelin starred restaurants in France, including Restaurant Pic (***), Le Domaine d’Orvault (*), La Bonne Etape (**), Château de Montreuil (*) and La Côte Saint-Jacques (***). In 1988, I performed a year’s Military Service as a Commis chef with Joel Normand, Head Chef at the Palais de l’Elysee, Paris. In 1992, I joined the team at my father’s three Michelin star restaurant, The Waterside Inn in Bray, Berkshire, as a Demi-Chef de Partie before being promoted to Sous-Chef in 1995 and eventually Joint Chef Patron with my father in 2001. A couple of years later, I took over as Chef Patron and continue the role today.

When did you first become aware of HA?

I have been aware of Hospitality Action since I started to work in the UK, in 1992. My family has always tried to support their work. 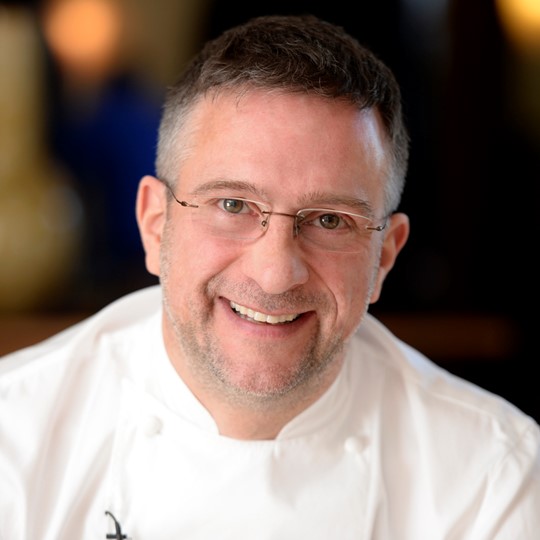 Why do you think the hospitality industry needs a charity like HA?

For all of us that work in the trade, it’s great to know that someone has your back. The charity is a lifeline for anyone who needs it, no matter what your age, position or background. We face ever-increasing pressures and demands, with more stress and less time to look after ourselves. The current coronavirus crisis is a brilliant example of the importance of HA. In a short space of time, they have rallied support and raised an unbelievable £500,000 to help those critically affected by the current lockdown. They have been able to help people left in real danger by the sudden closure of our businesses, with emergency funds to tide them over whilst waiting for government support. Hospitality Action wasted no time stepping up to the plate and they are needed perhaps more now than ever in their long history.

How does the Waterside support HA?

We try to do what we can. We donate prizes, vouchers for fundraisers and sometimes host or participate in special events. Last year we were busy helping to raise funds. I have fond memories of participating with my father in the Patrons’ Dinner last June at the Mandarin Oriental Hotel, London. We prepared the dessert course. It was a brilliant occasion and great to work alongside our friends and fellow chef patrons, including Jason Atherton, Tom Kerridge and Ashley Palmer-Watts. I recall we also held a dinner and special Q&A event with Brian Turner and my father, at Roux at Skindles, our brasserie located a mile or so upriver from The Waterside Inn. It’s fun to help out and we try our best to join in. HA always has a myriad of great fundraising ideas to tempt and inspire us. A third of profits from the Roux Legacy TV series and Roux Scholarship 2013 were donated by the family to Hospitality Action. And, in 2007, Michel hosted a 35thanniversary dinner at The Waterside Inn that raised £30,000 for Hospitality Action and helped the then Chief Executive Penny Moore reach many more students through our alcohol and drug awareness programme. 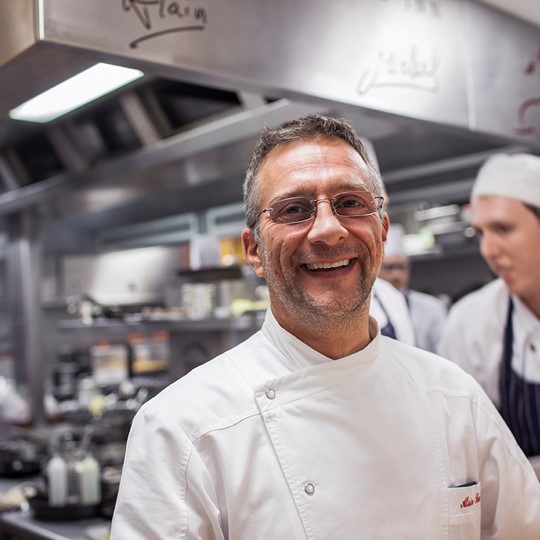 Describe your company culture – why is employee wellbeing important to you?

Employee wellbeing is crucial to productivity and performance, it’s a way of life for us. We are a small company so it really stands out if someone is unhappy or has a problem. It is important to ensure our workforce feels able perform at their best, so we support everyone as best we can. We try to encourage our staff members to excel at what they do and be an effective member of our team. We all depend on each other and look out for each other. We try to manage stress and maintain motivation.

What mechanisms do you have in place to look after employee wellbeing?

We encourage employees to talk freely and openly either to me or their manager, in confidence about any matter. Our door is always open. We spare the time whenever it is needed. We try to foster a positive, open culture. If anyone has problems, we explore practical ways to help. We also encourage staff training and rewards to help develop and motivate individuals.

How do you see HA’s work applying to your team?

It is reassuring for me and my team to know that HA are there for us when we need help or guidance. The range of confidential and expert advice, support and assistance they can offer is so broad, from debt advice and bespoke training to counselling for addiction. No matter how small or big the problem, it means the world to know this incredible charity, dating back more than a hundred years, is there for each of us. It is a reminder that the pressures we face are great and that is incumbent on all of us to try to support each other.

What does HA mean to you now?

HA is a backbone to the hospitality industry and we need them now more than ever. I so admire the fact that HA has been serving the industry for so many decades, proving its great resilience. Whatever challenges we face, HA is there for each of us and that is fantastic.

What did it mean to your father to be a patron of the industry’s benevolent charity?

My father was a passionate supporter of HA. He was a proud patron and was greatly inspired by his association and the tremendous initiatives he worked on. He always felt grateful for the opportunities that the hospitality industry had dealt him during his career. It was his world. He was keen to give something back, to enable others to benefit from his experience and give support where he could. He appreciated that if you are not well in your mind and body, you cannot perform or enjoy a good family life or career.

And what does it mean to you to follow in his footsteps?

It is a huge honour and privilege to be invited to become a patron of Hospitality Action and to follow in the footsteps of my father. He would be so pleased and proud. Like my father, I feel obliged to help where I can and I would not hesitate to recommend HA’s services to anyone in need. To support HA is a natural step for me, to step forward to help and support those in need. Everyone needs help sometimes. I feel the same towards HA as I do the Roux Scholarship, which was started in 1984 by my father and Uncle Albert. They both knew that knowledge meant nothing unless it is passed on; it’s the same reason we support Hospitality Action. To give back to the industry that we love so dearly.